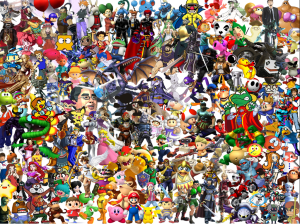 If you’ve been paying attention to video game news this week, you’ve heard countless hot takes on Nintendo’s new online service and how it’s a disastrous insult to its consumer base because it’s taking a service that was previously free and putting it behind a paywall. Other complaints include the service’s lack of good voice chat features, the fact that users’ cloud saves will be immediately erased if the service expires, and that the free games that are included with the service are a humdrum collection of NES classics that we’ve all played a hundred times before.

All of these complaints are valid and understandable. In a perfect world, multi-million and/or billion dollar corporations wouldn’t charge the average consumer for a service that mostly costs them nothing. This hypothetically perfect world would also likely include persistent cloud saves and probably would have voice chat that didn’t have to be paired through a shitty iPhone app. Hell, we might even get all games for free, not just a bunch of dusty relics from the ’80s.

Obviously we don’t live in that world. Greedy corporations (including many video game companies) consistently put their bottom line ahead of their consumers’ best interests. In a system built on the very foundation of greed, this is inevitable. But what has been lost in the shuffle with the outcry against Nintendo is the potential for a service that, if tweaked, could be a monstrous success.

If we’re being honest, Nintendo has been lagging behind the competition for the lions share of the last two decades. While they were a hell of a force in gaming from the launch of the NES through the lifespan of the SNES, they have done little to evolve since then outside of their gimmicky mainline console releases and their complete domination of the handheld gaming market. And as a result, they have been almost entirely surpassed by their competition, particularly Sony whose Playstation completely and utterly destroyed the N64 in sales before the Playstation 2 made the original system seem like a lukewarm appetizer. Since then, Nintendo has, for the most part, been playing catch up with their consoles lacking big releases outside of their first party titles and the bulk of the gaming market moving over to Playstations, XBOXs and PCs. But, even though each console’s library has been lacking (though the Switch is on track to dramatically change that), under the hood Nintendo has amassed a phenomenal library of games just waiting to be properly utilized.

Imagine for a moment if, instead of allowing Nintendo Online customers to play a few dodgy NES games from 30 years ago, Nintendo opened up their ENTIRE library for the same cost, allowing users to download and play any NES, SNES, N64, Game Boy, GBA, Gamecube, DS or Wii release that they wanted at any time as long as they maintained their subscription. Not only would this be monumental in the gaming sphere, it would be a runaway success for Nintendo and, I suspect, would accelerate the already rapid growth of the Nintendo Switch (which is already the fastest selling console of all time in its first year). For the first time since the Wii blew the PS3 and XBOX 360 out of the water in its first few years, everybody would be trying to catch Nintendo. With this one move, Nintendo would be unstoppable.

I know that a lot of people are skeptical over whether this sort of on-demand access to video games is viable. PS Now and Microsoft’s Game Pass have their fans, but PS Now requires users to stream their games (which is far from a viable solution) and XBOX’s game library, while great, doesn’t hold a candle to the one Nintendo has amassed over the years. And since Nintendo’s service allows users to download those NES games to their console and only needs an internet check-in every seven days, a lightning quick internet connection isn’t necessary. Had Nintendo given us the keys to their entire library, I suspect the lure of playing standout titles from across the company’s storied history all on one console that is portable would be far too tempting for a lot of longtime gamers, including myself, to pass up.

We’ve seen how on demand music and video have completely changed those two industries and while I would be hesitant to move to such an uncertain model for all of gaming, there is no reason Nintendo can’t utilize its expansive back catalog to its own benefit. I know Nintendo has a habit of shooting itself in the foot and leaving money on the table, and it appears to be doing so now with the launch of Nintendo Online. But all it would take is one announcement to open the floodgates to a new era of good will and profitability for gaming’s elder statesman.