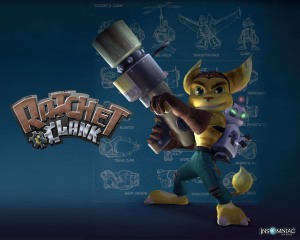 At turn of the century, following the runaway success of Nintendo’s Super Mario 64, the gaming landscape was rife with 3D platformers eager to stand out among their peers. Coming in a couple of years late to the party, Insomniac released Spyro the Dragon for the Playstation in 1998, building off of what had already become commonplace in the genre while striding forward with a significant emphasis on item collecting, high-flying platforming, and enemy pathing. The Spyro formula was not only a runaway success for Insomniac and Sony, it was a new benchmark for a genre in the midst of its ultimate boom period. But after parting ways with Universal, Insomniac lost its license to its flagship franchise just as the Playstation 2 began making its first of many rounds on store shelves. It was time for a new direction. Insomniac could have probably very easily stuck to its collect-a-thon roots with a new bi-pedal character and continued to milk their already proven formula, but they chose to make a much more daring move by focusing on weapon-based combat with Ratchet and Clank.

While it seems commonplace now, bringing guns into a platformer was a new idea in 2002, perhaps contributing to Ratchet and Clank’s unfair Teen rating by the ESRB. It was a lot to digest for Spyro fans; compared to Spyro, Ratchet and Clank was a much more combat-focused, difficult game that, on the surface, holds little in common with the minuscule purple dragon from the last era. While the enemies reacting to the player was a novel concept in 1998, by 2002 it had become commonplace and was no longer a selling point for Insomniac’s new IP. And other than the bolts used as the game’s currency, the focus on collecting and exploring was virtually absent from Ratchet and Clank. The original title also shows its age with its lack of recurring characters and bare-bones narrative. While the humor from the Spyro series is turned up to a new degree, particularly thanks to Clank who shines as Ratchet’s robotic companion, the game lacks the whimsical charm that was a significant contributor to Spyro’s success.

What Rachet and Clank lacks in charm and exploration, though, it makes up for with originality and variety. Each of the worlds Ratchet visits is largely unique, even more so than in the Spyro games. And while there are fewer levels to explore, each one is significantly larger and more dynamic than anything Insomniac had ever attempted before.

What Rachet and Clank lacks in charm and exploration, though, it makes up for with originality and variety. Each of the worlds Ratchet visits is largely unique, even more so than in the Spyro games. And while there are fewer levels to explore, each one is significantly larger and more dynamic than anything Insomniac had ever attempted before. Even better, the weapons and gadgets that Ratchet acquires across these worlds leads to unique challenges with a multitude of options and play styles available to the player. Clusters of enemies are susceptible to the trusty Bomb Glove Ratchet starts the game with, but why not guide a remote-controlled missile into them with the Visi-Bomb, igniting them all in a ball of flames with the Incinerator, or sending in your own army of Clank-like drones with the Glove of Doom? These gameplay options are exciting to explore and master and make the acquisition of each new weapon an exciting celebration of chaos.

Insomniac were successful in creating a new formula that could stand comfortably outside the shadow of their PS1 mascot. Unfortunately, with the benefit of hindsight, Ratchet and Clank is really more of a launching pad for the greatness the series would later achieve than it is a destination like it may have been upon its release. While the gun variety is great for new players, compared to its follow-ups like Your Arsenal, its actually pretty shallow. Even worse, guns didn’t start leveling until Ratchet and Clank’s second outing in Going Commando, nullifying the encouragement for variety every other game in the series has. Unlike in newer Ratchet and Clank games, in the original I found myself sticking to a select handful of go-to guns, particularly in the game’s much harder second half with no reason other than personal entertainment to really branch out and level up the rest of my arsenal. Another baffling decision was creating an uncomfortably antagonistic relationship between Ratchet and Clank for virtually no reason. Most players who go into platformers with two protagonists want to focus on their friendship and bond as they take on the rest of the world rather than sit through bickering between the two in every cutscene. They work it out in the end and become the beloved duo the series is known for at the game’s climax, but until then it can be a pretty bumpy ride between the two and the player’s investment in their relationship. Another significant flaw that holds Ratchet and Clank back from greatness is its extremely limited checkpoint system. For the most part, if you die in a level you pretty much have to start from the beginning. This wouldn’t be a problem in a more compact level progression, but these worlds are huge and making it through them in one go becomes a tall order as the difficulty spikes in the game’s second half. This problem was thankfully rectified in future releases, but it can significantly sour the original experience, particularly for players who are new to the series.

Overall, the original Ratchet and Clank was a significant turning point for Insomniac, and for platformers in general with its focus on combat much more prevalent than its focus on platforming and exploration. However, while later releases would supersede what Insomniac accomplished with Spyro, the first entry in this long-standing series was actually a significant step back in polish and overall quality from the Spyro series. Fans of the Ratchet and Clank formula perfected with later titles like Going Commando and Up Your Arsenal shouldn’t hesitate to play through this game (if they haven’t already) in order to appreciate its place in history, but new players are probably better off just starting with Going Commando and progressing from there.