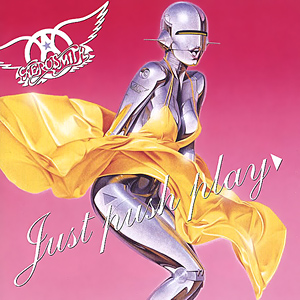 Just Push Play is the perfect follow-up to Nine Lives in that it offers a unique direction with occasional greatness, but more often than not results in passable but uninspired songs that bring nothing new or exciting to the table. Even so, I’ve always pulled for Just Push Play over Nine Lives for some reason. Certainly it is the greatest departure from their conventional sound that Aerosmith ever produced; you’d be hard-pressed to believe that this Aerosmith is the same one that was behind their debut back in 1973 if it wasn’t for the name on the box. Maybe I just prefer the aesthetics of a Marilyn Monroe robot to a suicide pussy cat. Whatever the case, Just Push Play is what it is: an overlong example of, as Joe Perry has said himself, “How not to make an Aerosmith record.”

Yet even though “Outta Your Head” was the worst Aerosmith song since Done with Mirrors and “Light Inside” wasn’t much better, the album does produce a hilarious title track full of yikky-yakky nonsense from Steven Tyler that he somehow pulls off, the beloved “Jaded” and its melancholy undertones that scored Aerosmith one of their biggest hits ever, the overly dramatic yet improved follow-up to “I Don’t Want to Miss a Thing” (“Fly Away from Here”), and my personal favorite, a Joe Perry-featuring electronic love story in “Drop Dead Gorgeous” (proof that when Joe Perry dies and they make a hologram of him, he’ll still be just as smooth). The fun didn’t have to stop here; Aerosmith could’ve included the excellent “What Kind of Love Are You On” that they put on the Armageddon soundtrack, but you can’t have it all I suppose. And anyway, why would Aerosmith put all of their good songs on just one album? Then they wouldn’t have an excuse to make another one.