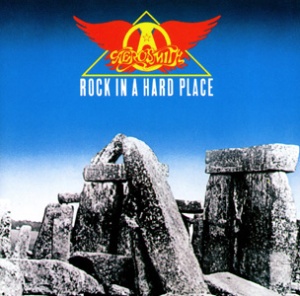 Often considered the worst Aerosmith album ever, if you even consider it an Aerosmith album at all (considering its lack of both Joe Perry and Brad Whitford), Rock in a Hard Place is an album for which I have always nonetheless rooted. It was the last Aerosmith album that I ever bought in an actual record store (on a date with an ex-girlfriend no less) and is thus a transaction that I remember quite vividly. Despite this relative affection attached to it, though, there can be no denying that this is not a great album by any means. Though drummer Joey Kramer doesn’t even consider it to be a truly canonical Aerosmith release due to its lack of nearly half of the band, he does jump to its defense to some degree. “It doesn’t suck,” he wrote in his 2009 autobiography. True. But not much more can be said for it.

“Jailbait” kicks off the album with a raw, albeit sloppy energy, and I always appreciated it for that, but it pales in comparison to its followup “Lightning Strikes” which has easily become the cult favorite song on the album from die-hard Aerosmith fanatics like me. But I’ll do “Lightning Strikes” one better with the title track, featuring a fun horn-based riff and a slippery sleaziness on Steven Tyler’s hook that stands comfortably alongside some of the best work Aerosmith had recorded throughout the ’70s. It almost keeps this album afloat single-handedly, a centerpiece worthy of much better bedfellows.

This is where the praise ends, however as the other six tracks on the album range from pretty good but forgettable (“Bitch’s Brew,”) to even more forgettable (“Cry Me a River,” Jig is Up,” “Push Comes to Shove”) to bad (“Bolivian Raggamuffin”) to downright depressing (“Joanie’s Butterfly” aka the worst Aerosmith song ever). I understand that Aerosmith was trying to put on a brave face by putting something out after the three years of silence that followed the good-but-not-great Night in the Ruts, and I’ll always appreciate Rock in a Hard Place for the memories and its two standout tracks. But the rest of the album should probably remain a footnote in Aerosmith lore.