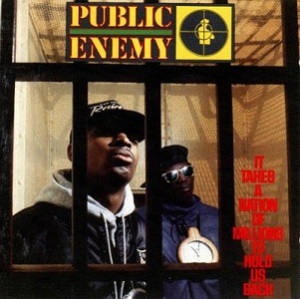 In 1988, Public Enemy tapped into a level of reality and political activism with It Takes a Nation of Millions to Hold Us Back that was unmatched, opening the floodgates for an explosion of black activism from across the entertainment spectrum. It was loud, noisy, and controversial, and it is looked back upon fondly for its place in musical history, often ranked as the greatest Rap album of all time by music publications due to its point of relevance in music history. But considering how far the genre has come since ’88, it’s hard to listen to Nation with modern ears and still feel the power that it once generated behind Terminator X’s funky beats.

Certainly Chuck D’s rhymes (and more importantly, his delivery) still sounds urgent and relevant, and there are certain tracks that still manage to stand the test of time despite their humble production. “She Watch Channel Zero?!’s” epic Metal riff is driving, “Party for Your Right to Fight’s” anthemic message is long-lasting and, of course, “Bring the Noise” is still beloved, but for each of those there’s a regrettable Flava Flav solo (“Cold Lampin with Flavor”) or repetitive earworm (“Don’t Believe the Hype”) that would’ve been better at half of its 5-minute length. Even so, “Black Steel in the Hour of Chaos” remains one of the most important Rap songs of all time and its killer Isaac Hayes sample provides an eerie creek that almost sounds like a cell door squeaking shut as Chuck D delivers some of his most sobering rhymes about rebellion and wrongful imprisonment.