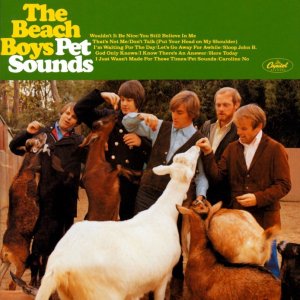 There was a golden triangle of influence in the mid-’60s as The Beatles began their transition from Pop superstars to Psychadelic weirdos changing music forever in the process. It began with Rubber Soul which blew the minds of pretty much everybody who heard it in 1965, not the least of which was Brian Wilson, the leader of a similar, harmony-focused boy band ancestor called The Beach Boys. The moment when he finished listening to the last song of Rubber Soul, he realized that his group’s focus on music had been all wrong, and set out to create his masterpiece: Pet Sounds, which exceeded its inspiration by leaps and bounds with its mix of simmering, psychadelic harmonizing, whimsical atmosphere and earnest lyricism. Where Rubber Soul, and, particularly, Revolver were sprawling records filled with heady musical explorations and nonsensical lyrics, Pet Sounds adheres to more relatable subject matter: Loneliness. Longing. Hopeless romanticism. Depression. Anxiety.

While the group’s harmonies are painstakingly perfect, the real star of the show is the aquatic, dreamy orchestration that ensures each track is dripping in emotion. Classics like “God only Knows” and “Caroline, No” need that strange, harpsichord track or that accordion intro; otherwise they’d just be songs. But with Wilson’s Spector-influenced production they become fresh and unique. Even instrumentals like “Let’s Go Away for Awhile” benefit from Brian Wilson’s focus on aural perfection; it’s a kind of musical Rorschach test. With the absence of words, Wilson didn’t tell his listeners how to feel. Instead, he opened the door for self-expression like many of the great artists.

While there’s no doubt some pieces stand out more than others (see the upbeat longing of “Wouldn’t it Be Nice,” the brilliant harmonizing of “Sloop John B” and the stirring production of “Let’s Go Away for a While” for the album’s best moments), every song on Pet Sounds is a whirlwind of fascinating orchestration from one of music’s great auteurs. Is it the masterpiece all of the best-of lists say it is? Probably not. But if you listen to this album thinking about that, you’re doing it wrong.